Today I'd like welcome Khalid Muhammad, author of "Agency Rules" to the Thursday interview. Before we get started, a quick intro!

By day, I am a mild-mannered business executive keeping myself busy running a marketing and brand management company. I take someone else’s product and create concepts, ideas and brand stories—things that make consumers want to buy, invest and save their hard-earned money. By night, my alter ego emerges; one that has a penchant for sadistic retribution towards those who wrong me, and that spends its time devising intricate and detailed plans for a nefarious end. So, I choose to write novellas, novels and short stories to let the wickedness escape; the other option means a great deal of blood, numerous torture implements and…well, infinite ways to dump a body. The writing is better for everyone involved and less dangerous for the guilty… until I write them into another story.

Yes, actually depends on the loved one. My wife, kids, mother and sister, yes. Why? These are the people that have taken care of me as a child and that I take care of as an adult. It’s my job to protect them, no matter what. Everyone else… depends on the law that I would have to break.

No.2  What is the difference between being alive and truly living?

Being alive is going through the motions. You go to school to get an education because that is what is expected. You get a job to earn money so that you can support yourself. You find time to hang out with friends because you need to relax. You get married so that you can have a family of your own. That’s being alive. Jumping out of a plane at 5,000 feet, paragliding over a river in Brazil, driving an expensive luxury car – that’s living.

No.3  What motivates you to write?

Life. My debut novel, Agency Rules – Never an Easy Day at the Office, is a story that comes from the streets and history of Pakistan. When you watch what the media says about the country, it’s all terrorism, but they never tell you why it is that way. Being a Pakistani, and living in the country, I get tired of listening to the one-sided narrative that is told to the world – there is so much more to the country than the 1% that they want to focus on, which is where my story starts. The reader gets to experience Pakistan through the eyes of Kamal Khan, a young man from a privileged background that leaves it all behind to serve his country. He is the embodiment of the real Pakistani, not the ones you see in the government or the media. They never get coverage because they are too busy working to achieve their dreams and ambitions. Pakistan, my Pakistan, is a troubled nation from years of double games between the corrupt politicians, powerful Army and foreign influences that want their agendas to take precedence over national issues. It’s a nation whose citizens are hungry for a better life, hard working, motivated and looking for opportunities that are promised but never delivered. This is the story of a country and its people, plagued by terrorism.

No.4  Why do humans want children?

Family, relationships and legacy. Humans, people, want to have children so that they can have a family of their own. People to love, care for and share with. We want to build better relationships with our children than we might have had with our own parents. We want to motivate and encourage them to achieve their dreams, like our parents did for us. They are our legacy, the people that carry on our family names and make us proud of what we created.

No.5  What was the biggest challenge in creating your book "Agency Rules – Never an Easy Day at the Office"?

The realism. When you write a book like this, you want to make sure that you get the feelings and scenes right. So I spent a great deal of time talking to people about every topic, listening to their voice, their emotions and their feelings. I am quite proud of the fact that you could walk down a street in Pakistan and find the situations that I describe in my book. Personally, I wanted to make sure that Agency Rules – Never an Easy Day at the Office was real because of the story and message that it needs to deliver. I didn’t want to create an escapist spy thriller that could not be believed. I wanted readers to understand the Pakistan that I love, the Pakistan that makes my heart hurt and the Pakistan that I dream will emerge from the problems we face today as a nation and a citizenry.

No.6  What is the most important thing you have learned in life so far?

Never have any regrets! I had a rough childhood and it effected me all through university. Then one day, I sat down and wrote a bunch of letters to the people that had hurt/wronged me and burned them. Since that day, I don’t carry regrets. No, I wish I had for me. I do it and come what may. It’s made life more enjoyable and healthy for me.

No.7  How did you come up with the title "Agency Rules – Never an Easy Day at the Office" ?

When you talk about intelligence agencies around the world, they are either referred to as “the service” or “the agency,” with the exception of the CIA, who like the moniker “the company.” Agency Rules, the series title, came from that thought process. I wanted a title that would automatically identify the book series in reader’s minds, but not be so spy or espionage related that it would turn off readers from other genres. The Never an Easy Day at the Office came about half way through writing the book. I was storyboarding the next few chapters and the more I looked at how the progression was mapped, the more I saw the difficulties and struggles for my main character.

No.8  How do you handle personal criticism?

Depends on whether it is true or not. If someone criticizes me just for the sake of doing it without any factual base, I do tend to get ticked off and confront the person. I want to know if I have wronged them in some way that they would make something up about me. If there is a factual base to the criticism, I take it to heart and think about it. I don’t want people to think negatively of me, and I don’t want to think negatively of others, so if there is something I need to change, I will do it.

No.9  Why should people read your book?

Well, other than the genre and being a book about Pakistan and terrorism, Agency Rules – Never an Easy Day at the Office is a fast-paced, action packed story that will keep you guessing all the way to the end. I hope that, as a reader, you will experience that Pakistan that I fell in love with when I moved home from the United States after 25 years. You will feel your heart wrench with Kamal’s when he is stationed in Karachi, Peshawar and buried deep inside the terrorist camps. And, hopefully, you will cheer him on, because he is the Pakistani that you don’t see in the media – smart, driven and motivated to do good for his family, fellow citizens and country.

No.10 Why is there something rather than nothing?

Thanks Khalid for taking the time to answer my questions & the best of luck with your new book!

Check out his new book "Agency Rules" on
GOODREADS & AMAZON 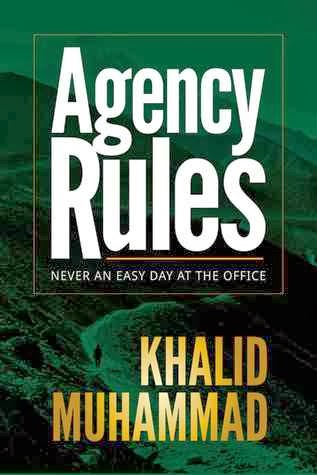 Celebrated as a ragtag force that defeated and broke the Soviet Union, no one predicted the Mujahideen would bring with them a plague that would spread like wildfire through Pakistan in the years to follow. When the battle-worn fighters returned with no enemy or war to fight, they turned their sights on the country that had been their creator and benefactor.Shrouded in political expediency, hampered by internal power struggles, international espionage and doublespeak that makes Washington’s spin doctors proud, Kamal’s mission is a nightmare of rampant militant fundamentalism that threatens to choke and take Pakistan hostage. For him, the fight is not just for freedom, but the survival of a nation.